A fine Chinese export porcelain 10″ soup plate, decorated in Famille Rose enamels with a central Mandarin scene of a kneeling supplicant before an obviously important official on a rather grand garden terrace with marble steps overlooking a river in the background. The richness of detail continues in a full floral and butterfly border with gilded edging. The color and detail in these imaginative hand-painted pieces never ceases to catch the eye – note the well-rendered marble stair and the official’s detailed rank badge. Very good condition. Circa 1820. A very special Chinese export porcelain tea bowl and saucer made for the European market, thinly potted and bearing a finely rendered image of Moses Amongst the Bullrushes – almost certainly taken from a European engraving of the period. This grisaille-decorated ware, sometimes called ‘Jesuit ware’, often carried such images, both religious and secular, and we have often handled nativity and crucifixion scenes and portraits of Calvin and other religious leaders, but this is the first time we’ve seen a image of the baby Moses amongst the bulrushes.  In addition, we are pleased to have an example in such near pristine condition.  The saucer measuring 4″ in diameter, the tea bowl 3″.  Circa 1745. A really fine pair of Chinese export porcelain shaped dinner plates meticulously hand-painted in a raspberry enamel, each with a central scene of a ship flying what appears to be a Dutch flag ailing through choppy seas towards a city on the horizon, most likely Amsterdam, one of the premier China Trade ports of the world at this time. The very linear rendering, almost certainly taken from a engraving of the period, is encircled with a border of a snake swallowing its own tail. This ancient emblem originated in Egypt and is called an ouroboros and it denotes the repetitive cycle of creation arising out of destruction. How this image ended up on a piece of Chinese porcelain with a European maritime image is cause for further speculation. What is more keeping with the period of the plate is the charming scrolling and foliate and gilded spearhead borders. Both plates measuring 9″ in diameter and in great condition with only slight re-touch to minimal stacking wear. Fantastic maritime images of the China Trade. Mid-18th century. A rather rare and highly unusual Ming period Chinese sancai-glazed biscuit ewer in the form of a crayfish poised upon a lotus leaf riding the crest a wave with koi jumping amongst the swirling waters on either side, and a further companion, a toad, forming the cover of the ewer, riding upon the crayfish’s back. The color, composition, and form of this piece all adds to its charm and whimsy.  Pieces such as these were made not only for the Chinese market, but also for the Southeast Asian trade, especially Indonesia, where they were used for wine vessels in ritual ceremonies, as well as a few making their way into early noble and royal European collections where they were admired as curiosities and given as diplomatic gifts. Measuring approximately 8″ tall x 5″ wide, this one appears in rather good condition with only some restoration to the cover, the tip of the spout, and one of the crayfish legs. Similar example in the Rijksmuseum in Amsterdam                Circa 1573-1620. A fine Chinese export porcelain 10″ dinner plate, richly decorated in Famille Rose enamels and centered with a great Mandarin scene of figures on a rather grand marble and latticework terrace all within a lush border full of flowers and butterflies, all with gilded detail. Great detail throughout, note in the foreground the rockwork garden and the brushwork on the willow tree. In very good condition. This would have certainly made up part of an extensive and rather eye-catching dinner service. Circa 1820. A very finely potted Yongzheng period eggshell porcelain saucer, exquisitely decorated to a very high standard of craftsmanship, hand-painted in rich Famille Rose enamels that sit “proud of the surface” with a central peony roundel against a scrolling gilded foliate ground. A very small line at the rim on the reverse, otherwise very good condition, and bearing the collection sticker of K.R. Rizk whose collection was known for this degree of quality. Circa 1730. 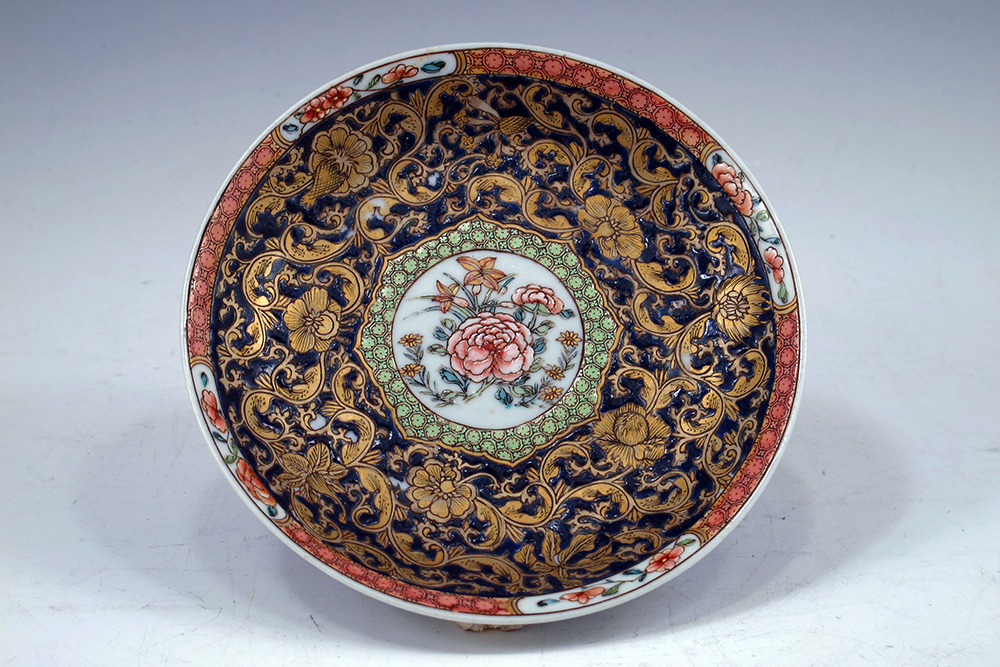 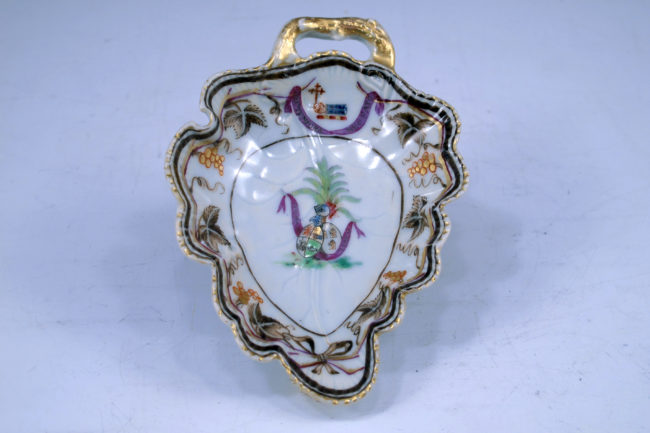 A rather rare and unusual form for Chinese export armorial porcelain, this finely crafted diminutive pickle dish bears the Arms of MacDonald of Scotland. This little gem reflects the level of artistry put into these special order dinner services; no matter how many pieces (and these services were expansive) or what size the piece, each form was hand-painted with the same degree of meticulous quality. Illustrated in Howard’s Chinese Armorial Porcelain, Vol. I, page 279. Circa 1795. A great form, these charming Chinese export porcelain pots-de-creme are decorated in the neo-classical style in overglaze blue with gilded details each centered with a classical urn. They are from a service ordered by Captain Richard Dale (1756-1826) on his last trip to Canton in 1799. Dale served in the Revolution with the likes of John Barry and John Paul Jones.  Illustrated and discussed in Schiffer’s China for America, page 204. Glaze line to the bottom of one, otherwise, very good condition. Two other pieces from his service are listed in our collection; Item #7481. A lovely pair of Chinese export porcelain kidney-shaped serving dishes vibrantly hand-painted in Famille Rose  enamels with central Mandarin scenes within a colorful border of well-rendered flowers and butterflies with a gilded edge.  Measuring 8″ x 11″ and in very good condition with only slight wear commensurate with age and felt pads adhered to the foot rims. This is always a pleasing form to add to one’s collection. Circa 1820. 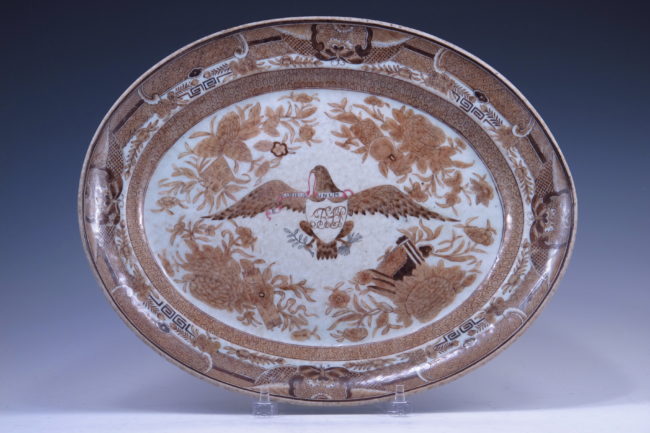 A very rare Chinese export porcelain oval platter of impressive size and desirable decoration, finely hand-painted in the Sepia Fitzhugh pattern and centered with a large American eagle supporting a monogrammed shield and bearing in its beak a banner inscribed E PLURIBUS UNUM  taken from an early version of the Great Seal of the United States. Part, undoubtedly, of a special order dinner service whose original owner BSP, as inscribed on the shield, remains sadly unidentified. Measuring 12 1/2″ tall x 15 1/2″, we do not think we have ever had an example of Sepia Fitzhugh this large and with an eagle of this size. Despite some kiln ash from it’s original production, this piece is in remarkably great condition with no damage or repairs, the eagle decoration intact and only minor retouch to stacking wear in the cavetto.  A centerpiece for any Fitzhugh or American market collection.  Circa 1820.